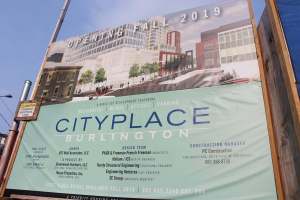 UPDATE:  Over eight years since he first unveiled the plans to redevelop the Burlington Town Center mall and five years since the old mall was demolished, developer Don Sinex has sold his remaining 50% share of the 3-acre parcel known acrimoniously as “the pit” to three local business partners who now have full ownership of the proposed CityPlace building site.

The local group consisting of Dave Farrington, Al Senecal and Scott Ireland, are now in talks to settle an outstanding lawsuit which many see as the final roadblock to acquiring the financing necessary for construction to finally begin.  The group, as well as Mayor Miro Weinberger, are hopeful that the new change in ownership represents a “major step” towards the long-delayed project from becoming a reality.

The timing of this deal is crucial, as an important development deadline is rapidly approaching this coming September.  As part of the development agreement, if construction begins before September 1st, City provided financing funds would be available to use for the rebuilding of two streets that were previously obstructed by the former mall building.  If construction has not been initiated by the deadline, the cost of rebuilding the roads falls directly onto the developers.  Although they have already approached the City about an extension to the deadline, City officials have declined to consider the request until “substantial progress” has been made toward breaking ground.

While the recent deal means that he is no longer associated with the land that will eventually be home to the 10-story CityPlace complex, Sinex does still share ownership of the intact remnants of the former mall with the same local partnership group.  No plans for those spaces have been officially announced as of yet; however, according to Sinex, there is a possibility that concepts and ideas could be discussed at upcoming Ward 2 & 3 neighborhood planning assembly meetings  For now, Farrington is optimistic that the project will proceed as planned, “We’re going to work.  Burlington’s going to see some action down there.”

Since 1985, we’ve helped thousands of clients buy and sell real estate in Northwest Vermont.  Our goal is to provide you with the local insight, information and resources necessary to make your purchase and/or sale a comfortable, informed and enjoyable experience.  We will continue to update this ongoing story as new information is released…