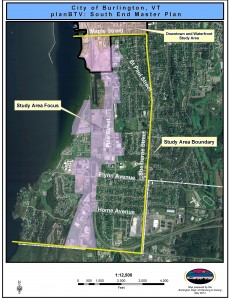 The 22nd annual South End Art Hop brought unseasonably warm temperatures, clear skies, and huge crowds to Burlington's South End this past weekend. Revelers were met with myriad installations ranging from dance and fashion to sculpture and performance art (and everything in between).  Just as two Art Hop attendees might look at a piece and have two different interpretations, a hotly debated topic at the Hop was the future of the South End. Will those aging industrial buildings be converted into high-end housing or remodeled into chic commercial spaces ŕ la Dealer.com and Burton? How will the Champlain Parkway impact the neighborhood? Would the South End lose its character if artists and artisans were priced out of the workshops, galleries, and studios that dot the former manufacturing hub? Seven Days' Kevin Kelley outlines the differing opinions surrounding the future of one of Burlington's most sought-after and culturally vital neighborhoods in his September 3rd article. Click the link below to access the story which features quotes from Lipvt's own Steve Lipkin on just what makes the South End so desirable. "Burlington's Changing South End Looks Way Into Its Future" by Kevin J. Kelley, Seven Days 9/3/14 South End Arts and Business Association Plan BTV- City of Burlington