This past week, the Chittenden County Transportation Authority (CCTA), voted unanimously on a plan for a new transit center on the block between  St. Paul and Cherry Street. The new building is planned to contain an indoor waiting lounge and restroom facilities, in addition, to eliminating existing bus traffic crossing the Church Street Marketplace.

On June 30th, the CCTA will vote on a finalized plan for the new transit center. If accepted, Burlington residents can expect to see a new transit station in the Fall of 2015. Total projected 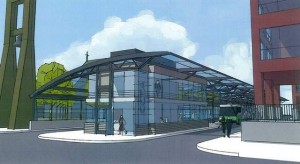 costs are estimated to be around $9.8 million dollars. However, details regarding building costs and specific customer amenities are still being negotiated.

Still want to learn more about this project?

On May 31st, at 6:00pm, a public hearing will be held in the City Hall for anyone interested in viewing the plans for the new Transit Station.

Remember to stay informed on the latest news regarding this project by visiting CCTA website. Or, click on the Burlington Free Press article to read more: St. Paul Street Selected for Burlington's New Transit Mall.